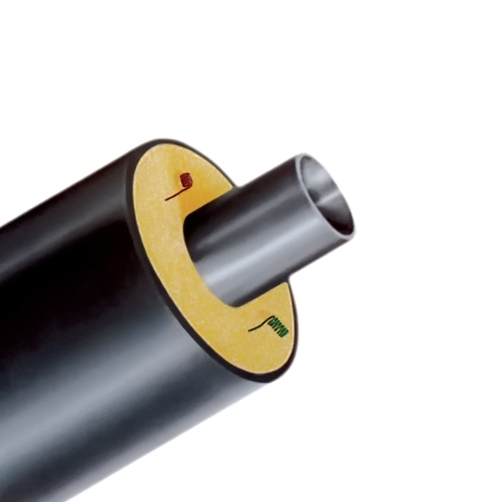 They are pipes manufactured to prevent heat transfer of hot or cold fluid. Since the pipe consists of different material layers, it is included in the composite pipe class.

Geothermal pipes have three layers. The inner carrier pipe consists of a Polyurethane layer (PUR) as insulation material in between and Polyethylene (PE) pipe at the outermost as a protective sheath. The carrier pipe material can be different according to the usage temperatures. PolypropyleneRandom (PPr) pipe is used at 70 ° C temperature and below, and steel pipe is used at 140 ° C and below. Thanks to its technical and cost advantages, it has eliminated the disadvantages of glass wool insulated pipes.

Pre-insulated pipes are made monolithic in the production area of ​​the company. It is manufactured in PPr pipe extrusion lines as the main carrier pipe. It is placed on the mass production line. Axing parts and leakage sensor wires are placed on the pipe. PE pipe is passed over the axial parts. Nozzles are closed to press PUR into the area between the inner carrier pipe and the tooth sheath. PUR is pressed into the hole on the pipe mouths. PUR is obtained by mixing two liquids called polyol and isocyanate. The two liquids are mixed with the machine and pushed out. The two products react and begin to swell and thanks to its porous structure, it acquires a structure that does not transmit heat. The pipe is ready for use after the PUR pressed between the pipe solidifies. If steel pipe is used instead of PPr, it is supplied from outside and the pipe is produced by applying the process applied to PPr.

The fittings of the product are manufactured manually without the need for a facility. The carrier pipe is manufactured by injection or confection method and placed in the product.

- It shows high resistance to corrosion as the casing pipe is Polyethylene.

- Humidity underground and above ground does not affect the insulation material.

- The insulation life is at least 30 years against external effects.

- Thanks to the applied corona treatment, since the polyurethane casing establishes a chemical bond with the pipe, it acts as a solid in thermal expansion and the carrier pipe elongation is prevented from damaging the insulation.

- Thanks to the monolithic structure, elongation of the steel pipe is prevented by soil creep forces.

- The polyurethane used has a certificate in accordance with EN 253 norm.

- Steel, PPr, copper can be used as the main carrier pipe. Upon request, it can be produced with the inside of the pipe (such as epoxy) coated. Welded, seamless steel can be preferred.

- If the carrier pipe is heated before laying and then soil filling is done, the prestressed system is obtained. In this way, the elongation effect as well as the heated temperature is eliminated. Since the total elongation values ​​decrease, there is no need to use compensators.

- All kinds of insulated pipes and fittings are available. (Elbow, TE, Valve etc.)

- Thanks to the sliding sheath system used in the joints, leakage and deterioration of the insulation in the joints has been eliminated.

- Since L, Z, U bends are not used in pre-stressed systems, there is no need for channel expansion for laying these parts.

- Since the insulation and casing pipe of the product is made in the factory environment, the site conditions do not have quality problems, and the length of the assembly time is not in question.

- It does not require construction structures for opening a gallery underground and carrying it on hangers. Problems caused by the filling of the channel are out of question.

- Production is made in accordance with international standards (EN 253).

- It has international certificates. (GEF)

During the installation, care must be taken not to damage the cable placed in the pipe PUR. Cable ends should be connected to each other properly.

Polyethylene tapes that can shrink in the joints must be heated so that there is no gap. The spaces that will remain here cause the PUR to get wet and its structure to deteriorate.

In order to prevent the PUR from being affected by the sparks of the inner steel pipe during welding, a barrier material should be placed in between.

In stockpiles, PUR should be closed in order not to be affected by partial rain and humid environment open to the atmosphere.

Layer compression should be made to avoid any gaps around the pipes while filling the channel. In particular, it should be ensured that the bottom of the pipe is filled with filling material. If there is a gap on the pipe surface and the compression is not good, the friction forces will be low and the pipe will elongate more. Since compensators are not used in pre-stressed systems, it constitutes one of the most sensitive phases of the project.

It should be checked whether the PUR of the pipes adheres well to the carrier and casing pipes. If it is not adhered, the soil friction force will not have an effect preventing elongation.

The manufacturing facility of the manufacturer should not only consist of a foam press machine. Since there is no synchronized unit, if the gap cannot be removed during the swelling of the PUR, it will remain inside. In this area, there is no insulation and collapses will occur with soil load.

1 - How many Celsius temperatures can be used up to the fluid?

It can be used with a mineral wool-PUR combination above these temperatures.

3 - Can pipes be used for steam transport?

Yes, steel ones can be used.

4 - Can it be used in Sogukwater lines?

Pre-insulated pipes prevent heat transfer from inside to outside. In the cold fluid transport, heat is transferred from outside to inside. For this reason, the cooled fluid in Chillers can be transported in our pipes without heating.

5 - Are compensators used in these pipes?

When pre-insulated laying technique is applied, since the internal pipe elongation is absorbed by the soil friction forces, there is no need for compensators as there is no elongation as the pipes in other systems.

6 - What is the corona treatment? Couldn't it be?

Soil friction forces are also utilized in absorbing pipe elongation. For this to happen, PUR must chemically react with both steel and PE to bond. The environment suitable for bonding between PUR and polyethylene is provided by corona treatment. If corona is not applied, compensator must be used.

Since these pipes are directly buried in the ground, there is no need to open a gallery. If opened, elongation should be considered